Imagine two users trying to access an employee table in the company’s database. One is requesting the total salary of the employees in order to transfer the money into their bank accounts. The other, upon receiving an email from the boss saying that he was impressed by John and decides to give him a raise, goes on modifying John’s salary cell in the database. No one knows how it goes, but suppose the transfer occured after the update. John ends up not getting the extra money that he earned this month, the guy who were told to give John more money probably is going to be fired. No one is happy.  This is also known as the incorrect summary problem.

Then maybe the boss rethinks his decision and finds himself being too hasty. The boss calls the other guy again and asks him to revert John’s salary to normal. Suppose the money-guy saw the previous update and went on transfering money based on the database table that he’s seen.  This leads to inconsistency in the realities of people involved. The boss thinks he’s smart , John is happy and thinks that the boss is dumb. A transaction writes a value that later gets aborted, but another transaction accessing the same element is not aware of this change and reads the aborted value. This is known as the dirty read problem.

If we allow two transactions to access a database element at the same time, God knows what will happen and we can only hope that everyone gets what they want. But hoping is never economical, so we have to come up with a solution to specify what each transaction can do and to which scope.

The solution is Concurrency Control.  The concept of concurrency control provides rules, methods and methodologies to maintain consistency of database components.

A database transaction is a unit of work that encapsulates a number of operations with defined boundaries in terms of which code are executed within that transaction. A transaction is designed to obey the ACID properties:

Database transaction, at any given moment, is in one of the following states:

After rollback, a transaction can be restarted at an appropate time if no internal logic occurs.

Database transactions are arranged within a schedule.

Before we discuss the details, first there’s an obvious question: Why would a schedule is serializable while it can just be serial ?

If we execute transactions serially, then no problem would arise because the output of a transaction is the input of another. No inconsistencies, no abnormalities, no anomalies.

That’s why we would prefer the schedule to be serializable rather than serial. Serializability ensures that the outcome is equivalent to transactions executed serially. How the transactions are arranged internally can be done differently and more effectively.

There are two major types of serializability:

A schedule that is conflict-serializable if it’s conflict-equivalent to a serial schedule, i.e. there exists some swappings of non-conflicting pair of opeartions that make the schedule serial.

We need to be able to detect conflict-serializability before we can do anything. One of the tests is precedence graph.

An operation is either a read or write. Therefore it follows naturally that a pair of conflicting operations is a pair of read-write or write-read or write-write. Each of these three pair of operations, if executed in reverse order, would produce a different result. That’s the whole idea of conflict.

How exactly does the precedence graph helps us with detecting conflict-serializability.

We need to prove the following: 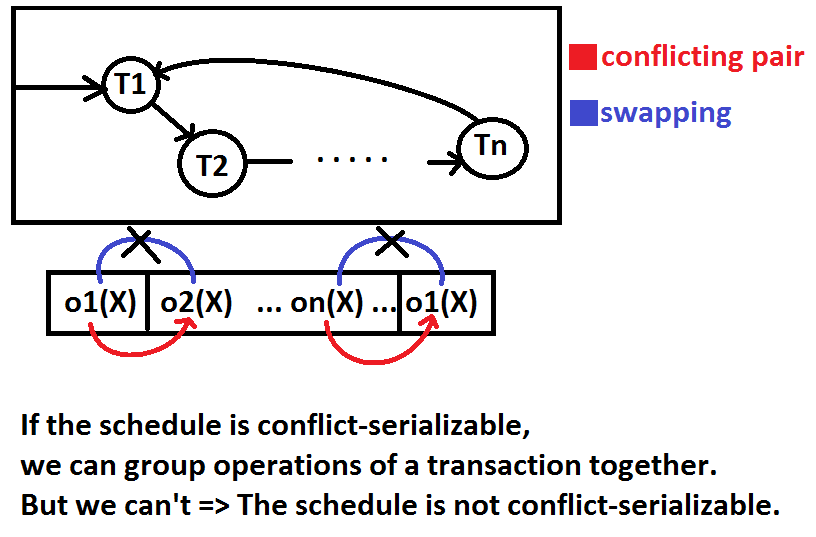 Therefore we have proved that the precedence graph is cyclic if and only if serializability is violated.

Locking is a mechanism used to prevent inconsistencies or data corruption caused by simultaneous accessing of transactions. A database system should be engineered in such a way that each lock is held as short as possible.

From database’s perspective, there are three types of lock that is used in locking:

To understand this, you have to know that most of the Database Management Systems support upgrade mode: The idea is useful when you request a SELECT query, meaning you read the database elements without needing to modify it yet, then afterwards when you’re finished calculating something you request an UPDAE query.  If we go with the usual types of locks ( read and write lock ), then you would read lock the object, then unlock the object, then write lock the object again.

But things turn really nasty between the miliseconds after you release the read lock and before you start the write lock, what if another transaction somehow gets scheduled and requests a write lock on the element. This means that we just got our needed element stolen before the our query is done. If we wait until the thief transaction finishes, then maybe the change that transaction made happened before the change we want in the UPDATE query but we actually want them executed in reverse.

There lies the motiation for upgrade mode: When a transaction read locks an element, and later it wants to modify that element, it waits for read locks of other transactions to be released and then it can throw in a write lock without having to release its own read lock. This way the problem we mentioned is solved. 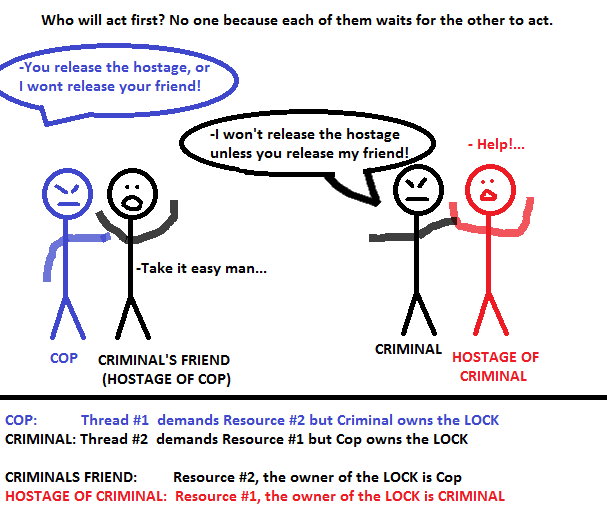 Update lock forbids write locks from other transactions while allowing read locks, it waits for other read locks to be released before throwing out a write lock without realeasing its own read lock. Update lock helps solve deadlock.

Remember the example we mentioned earlier when a transaction realeases a read lock and then in that split second before it throws a write lock another transaction goes in and write locks the element, causing undesirable result ?

Yeah well, that sort of problem arises whenver a transaction unlocks an element and another transaction immediately locks the element inappropiately. Therefore two-phase locking solves this problem by separating the locking process into two phases:

It means that once a transaction releases an element, its relationship with that element ends and hence it is safe for other transactions to take control of the element.

There are 3 types of two-phase locking.

This calls for a method to record exactly what the transactions are doing in real time. And logging is such a method.

A log is a sequence of records about what transactions have done. Log is stored in the main memory and will be written to disk as soon as possible, so we don’t have to worry abouot log getting lost in the crash.

A transaction has the following primitive operations:

Log only records when W(X,t) occur not when O(X) occur. This means that log does not necessarily reflect the actual values on the disk. When a crash happens, we cannot tell if a transaction has written a value to the disk or not from the log alone.

Order of execution in undo logging:

Recovery with undo logging: Classify the transactions in the log as either committed or uncomitted.

Undo logging has a disadvantage which is it requires to write all the changes to disk before a transaction can commit. This means we have to access the disk everytime before transactions commit, which is costly. To avoid this, we have a different mode of logging called redo logging.

To be able, at any moment, to sacrifice what you are, for what you will become. View all posts by minhthanh3145